For the first time since Ward LaFrance™ ceased operation in 1979, the original engineering drawings, parts lists, and assembly indexes of every truck ever built are together in one place. We a have all resources for anyone who owns a Ward or is simply interested in keeping the spirit of Ward LaFrance alive.

Check out our new features such as:

Truck of the Month 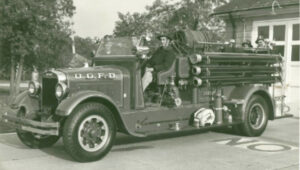 Ward Lafrance entered the custom fire truck manufacturing business in earnest with this triple combination model pumper in April of 1930. This style front end was offered by WLF from 1930 to late 1933.

This Ward spent its entire active fire service life with the Ocean Gate Volunteer Fire Department #1 in New Jersey. From there it went to Jersey City NJ Fire Department for use in parades and funerals. It later was sold to a member of the Jersey City Fire Department for personal use and lastly acquired by WLF owner John Burzichelli in non-operating condition in December of 2018. Restoration began in early 2019 and is nearing completion.

Originally powered by a Continental straight 8-cylinder gasoline motor and featured a Northern model 34BY rotary gear 650 gpm pump and 250 gallon booster tank. The windshield and cowl pictured were added by the fire department sometime after delivery.

Ward LaFrance is named after its founder, Addison Ward LaFrance. In his early years Addison worked as an engineer for his father and uncle at American LaFrance. He as assigned the projectof developing aspring raising aerial with the added incentive that if it worked, his father would buy him a car agency (now known as car dealerships). Obviously, the spring raising ladder worked and Addison Ward LaFrance was rewarded with a car dealership. The success of the dealership led to the formation of a truck manufacturer which he named the “LaFrance Truck Manufacturing Company.” The similarity in name with the flourishing American LaFrance Fire Engine Co. caused confusion even back then.

At a meeting with American LaFrance’s company officials, it was suggested that Addison Ward LaFrance rename his company the “Ward LaFrance Truck Company.” He did so, and the rest is history.

With manufacturing facilities located in his hometown of Elmira Heights, New York, the Ward LaFrance TruckCompany established a reputation for innovation and quality. Its distinctive name plate could soon be found on an array of diverse vehicles such as tank wreckers for the military, vans for UPS, over the road tractors, cement trucks, dump trucks, chassis for buses and trolleys, and even an armored car or two. If it had wheels and it was a truck, odds are that Ward LaFrance built it at one time or another.

6-SRKR Oil Base Converstion Kit.
Can't find a new filter to replace your old one? Here is the answer!

The very first offering from our "Wardware™" line of merchandise.

This is a high quality Richardson made baseball cap. Choose yours in black or red. The custom embroidered WLF logo shield is offered in the classic script or modern block script style in either black or red letters.

Only $34.95 including shipping & handling to any continental address.

Thanks to everyone who ordered the book. The response has been wonderful. For those who have yet to purchase a copy don’t wait...Order today while we have inventory…

Order today for only $29.95 and we will pay the shipping! That is a $7.50 saving! AND The author will auto graph it, plus you will receive a coupon for $10.00 off any Ward Merchandise including the soon to be released video “The History of Ward LaFrance” or any “Archival Framed Print”.